You are here: Home1 / News2 / MXGP3 / Eight GP wins for Herlings at Valkenswaard

After the sunny conditions of Argentina MXGP rediscovered a harsh winter climate at the Eurocircuit for the traditional Grand Prix of Europe and the visit to southern Holland. Rain, snow and plunging temperatures that dropped as low as -2 degrees added an extra physical edge to the bumpy Dutch sand.

Antonio Cairoli aced the first holeshot but Herlings, who started from 19th pick in the gate, was already up to third position by the third lap. Closing in on the Italian Herlings then benefitted from a mistake by Cairoli when he slipped and fell through one of the deep (and few) hillside ruts. In the second moto Cairoli was even stronger and formed a comprehensive lead only for Herlings to again cut through and find a way to pass his teammate. The Dutchman’s 1-1 was his first with the KTM 450 SX-F on a surface where he was raced undefeated for seven years with the KTM 250 SX-F; taking his record to an amazing eight from nine victories.

Herlings heads Cairoli in the MXGP standings by just 6 points with Coldenhoff 6th in the table.

Herlings: “I’m super-happy. We worked hard for this and it seems like we are getting better every week. I want to thank the team and everybody around us who has been pushing so hard. To get results like this is amazing. I’ve been riding at Red Sands a lot and the guys there did a great job with the track. I hope we’ll find some kinder temperatures next weekend!”

The Grand Prix of la Comunitat Valenciana at the new Red Sands circuit will bring MXGP together for round three next weekend. 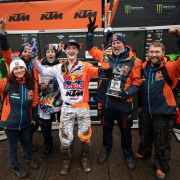 Jeffrey Herlings Wins GP of Valkenswaard For The Ninth Time