Jeffrey Herlings of the Red Bull KTM Factory Racing team won both heats of the Czech MXGP. Herlings has mixed feelings about this track, but was unbeatable on the day, and extended his world championship lead to 30 points.

Herlings was quickest in both training sessions and had a decent start in the qualifying race.
He recovered from fourth, but by the time he had gotten to second, Antonio Cairoli was too far gone and he settled for that position.

Herlings was second into the corner in the first race, and quickly assumed the lead by passing Cairoli.
He kept building the lead and won by a comfortable margin.

The second race was a near carbon copy of the first, except that Herlings had to withstand more pressure early on.
He kept his head cool and gradually edged away.

Herlings’ GP victory has put him in a strong position in the world championship standings with a lead of 30 points.
The series continues in two weeks’ time at Lommel in Belgium. 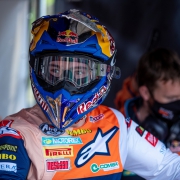