Jeffrey Herlings of the Red Bull KTM team had a good outing during the international motocross event at Axel. Herlings participated in the event to gain race rhythm ahead of the next GP in Kegums, Latvia, next weekend.

After having had a good qualifying session, Herlings claimed the holeshot in race one and set a blistering pace.  He opened up a comfortable lead, controlling the race from the front. He eventually crossed the line in first place.

The second race held some setbacks in store. A rider crashed right in front of Herlings in the first turn, and held him back long enough to drop him well down the field. After passing rider after rider, he finally got within sight of the top five, and finished fifth.

With his 1-5 results in the heat respectively, Herlings was second overall for the day.  He will now head to Kegums in Latvia for the GP.

“I’m satisfied with my riding. I haven’t participated in a race for five months now, and it was good to get a tough race under the belt before the world championship season resumes,”  he said.  “The first race went perfectly. In  the second, I had to come back from far back, but still made it to fifth. My feeling on the bike is good, and I have confidence going to Latvia,”  he said. 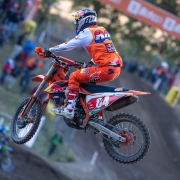 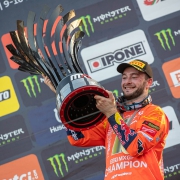