Valkenswaard, Lierop and Assen have all hosted Dutch rounds of MXGP throughout the last two decades, but Oss entered the calendar for its first Grand Prix of the Netherlands since the end of the 1990s. The track featured shallow sandy terrain that roughed-up considerably in the sunny and hot climate.

Local hero Jeffrey Herlings came to Oss with a superlative record on home turf and 14 Grand Prix wins in both classes since his debut at Valkenswaard in 2010. The 26-year-old was the center of attention for the small gathering of fans permitted to enter the circuit and took his third Pole Position of the season so far in morning Timed Practice.

Herlings’ first moto was action-packed as Ivo Monticelli landed on his back exiting the second corner. The Dutchman remained upright, bore the pain and steadily found a pace that pulled him up from 4th, through a frantic battle for the lead and into 1st to seize his second victory in succession. A scan between the motos revealed that Herlings had suffered a small fracture in his left shoulder blade and he had to sit-out the next race.

MXGP moves directly to Loket for the Grand Prix of the Czech Republic next weekend. Compared to the sandy demands of Oss, round five presents a different challenge with the narrow, hard-packed Czech course. 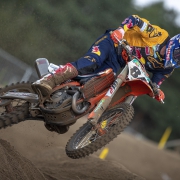 Herlings ruled out of Czech Grand Prix and continues to assess shoulder injury...
Scroll to top