The demanding sandy terrain of Lommel was no obstacle for Red Bull KTM Factory Racing as Jeffrey Herlings produced a heroic performance to finish 2nd overall at the Grand Prix of Belgium and the sixth round of the 2021 MXGP world championship.

Lommel remains the reference for Grand Prix sand tracks. The loose Belgian surface close to the Dutch border is notoriously deep, rough and technical and places an extreme test on both man and machinery. The sixth round of MXGP was also the third consecutive weekend of racing for the teams and riders of the two GP classes and the climate was cool, overcast and rainy.

Less than two weeks after fracturing his left shoulder blade in a racing incident at the Dutch Grand Prix and after sitting out the Czech round seven days ago, Jeffrey Herlings elected to attempt Lommel late on Saturday afternoon. The 2018 MXGP World Champion is a renowned sand rider and wanted to keep his hand in the 2021 title dispute. The 26-year-old was a tenth of a second from securing Pole Position in Timed Practice and then slotted into 2nd place on the first lap of the opening moto. He chased Romain Febvre for 10 of the 15 laps and maintained his pace to eventually take the lead and win his third consecutive race by a comfortable 28 seconds. Torrential rain fell during the moto and continued sporadically into the second motos. Herlings was unlucky to tangle with Glenn Coldenhoff three corners into the second start. The incident meant he had to cut through from the lower reaches of the top twenty and reached as high as 5th before he ran out of energy and momentum. The 1-5 was still sufficient for the second step of the podium and means he sits 5th in the standings, 42 points from 1st.

Jeffrey Herlings: “We didn’t ride much in practice but we had a good gate pick and then in the first moto Romain had really good pace, so I just sat there to save energy. As everybody knows, I broke my shoulder blade and it’s not normal to be riding again in thirteen days. I didn’t know if my speed would fade because the track was so rough and hard on the body. At one point I felt I could run a faster pace. I passed Romain and made a gap. I started well in the second moto – fourth or fifth I think – but came together with Glenn going for an inside line. It was a shame to be last but I fought my way back to 5th…then I faded! I couldn’t hold onto the bike that well and I didn’t want to make a big crash. To go 1-5 is a good day. One week ago we thought the championship was over – and I still need to hunt down the points – but 42 points is not too bad and there are still a lot of races and options ahead. 42 away is not where I want to be but if I had this offer a week ago I would have signed for it.”

The flurry of four Grands Prix in four weeks will come to a close with the trip to the Kegums circuit and Latvia in the coming days. Kegums promises another sandy challenge, but the ground is harder and slicker that the surface encountered at Lommel. 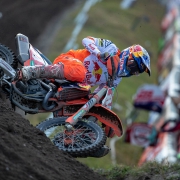 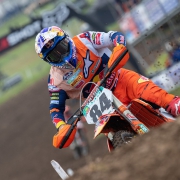