You are here: Home1 / News2 / MXGP3 / Double moto win for Jeffrey Herlings in MXGP of Trentino

Pietramurata was sunny and busy with fans for the first of three appointments this week. The 2021 MXGP schedule means the hard-packed, narrow and compact circuit will stage races this coming Wednesday and Sunday as the series pushes towards a conclusion. The ground was slick and the winding, elevated nature of the course placed a premium on moto starts.

Jeffrey Herlings was denied a sixth consecutive MXGP Pole Position by just four hundredths of a second in Timed Practice. The Dutchman had to settle for 2nd.

Herlings used his KTM 450 SX-F to power to a top three start and then passed Jeremy Seewer to lead and then score his eleventh moto win of 2021.

At the start of the second race Herlings tangled with Tim Gajser on the start straight and rounded the first corner outside of the top ten. He then produced a display of accomplished and forceful riding to grab P1 only minutes from the checkered flag. The 1-1 scorecard was his second rout of MXGP this year and gives him a 50% win ratio as well as stretching his margin with the red plate to 24 points over Romain Febvre.

Jeffrey Herlings:“It wasn’t an easy one today and this is not an easy track for passing. The first moto was tough but I had to fight even more in the second one. I could see the others ahead in the first laps and I thought ‘now, it’s go-time’ I played it smart and went it count in the last couple of laps. I want to thank Red Bull KTM for their excellent work. I’m in very good shape but we never underestimate the competition.”

The Grand Prix of Pietramurata brings MXGP back to the same facility this coming Wednesday. 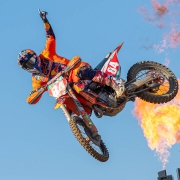 Setback For Jeffrey Herlings At GP Of Pietramurata
Scroll to top